Demolishing of the Old Bjølvo power plant from 1918 is tough work. Here, mechanics are in full swing dismantling one of Europe's steepest penstocks, working on a 62-degree slope.

The hundred-year-old that disappeared

Building a hydropower plant is an extensive and demanding process, and demolishing one is no laughing matter either.

High above Hardangerfjord, three industrial mechanics are in full swing dismantling one of Europe's steepest penstocks. Working on a 62-degree slope, well secured with ropes and pulleys, they are hard at work with cutting torches on the 100-year-old structure.

"The terrain is steep and there are large and heavy components to be dismantled and removed. Without roads it's impossible to move a crane up there, so most of the work has to be done by hand."

But it's not just the physical conditions that have made it difficult to demolish Old Bjølvo power plant... 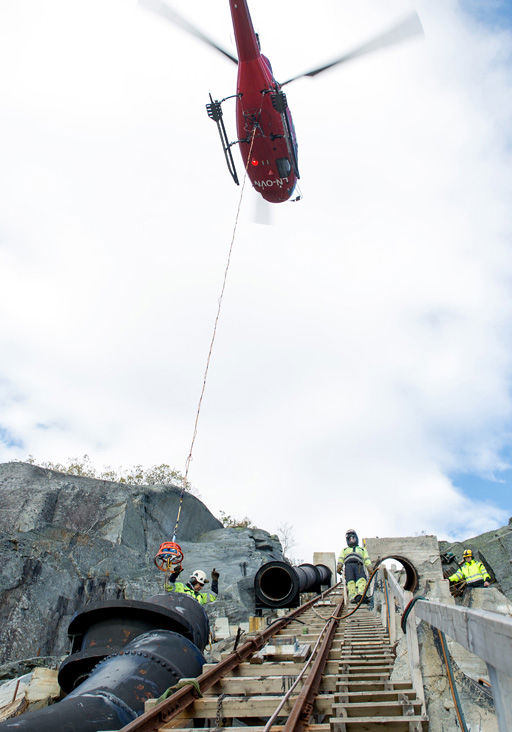 The helicopter hovers over the mountain and delivers the necessary Equipment.

But it's not just the physical conditions that have made it difficult to demolish Old Bjølvo power plant in Ålvik, Norway. From 2006, when the demolition order came from the Norwegian Water Resources and Energy Directorate (NVE), nine years would go by before work could begin.

"To understand why this has taken so long, we almost need to start at the beginning," explains Vidar Riber, Statkraft's power plant manager in Hardanger.

Old Bjølvo power plant from 1918 is namely more than a series of technical installations, it represents a piece of Norwegian industrial history and the very livelihood of the small community of Ålvik.

With the power from the mighty Bjølvefossen waterfall, the smelter provided badly needed jobs in the village. People flocked to Ålvik. Roads, homes, a school and a community centre were built. The power station itself, designed by architect Thorvald Astrup (1876-1940), has stood as a symbol of the emergence of modern Ålvik for nearly one hundred years.

No wonder that there was a reaction when the demolition order came. 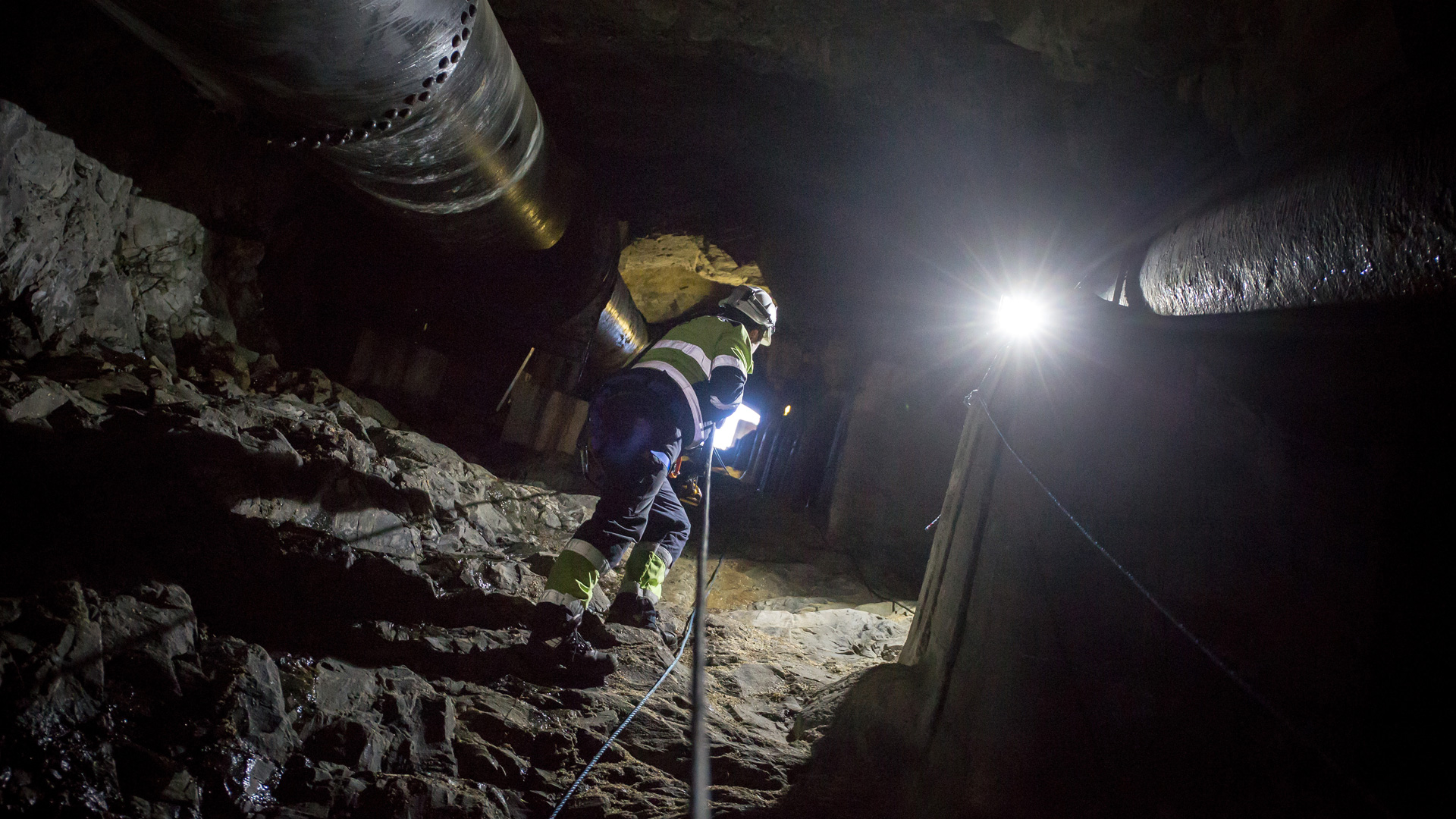 10 October 2016: Old Bjølvo power plant and its pipelines is dismantled.

"When Statkraft took over Old Bjølvo in 1996, as a result of the reversion to state ownership laws, we considered all options, including continuing to operate the plant," says Riber. "But the maintenance backlog was too large. With three of five generating units dating from 1918 it quickly became apparent that an upgrade would prove too extensive and expensive."

"Many people wanted to preserve the old power plant for its historical value. We were open to proposals for new activities in the old power station and the upper employee residence, but the initiatives lacked funding."

"After several years of discussions between the county council, municipality and NVE, the Directorate for Cultural Heritage intervened and lifted the temporary preservation order in 2014," says Riber.

"It was decided that Old Bjølvo should be comprehensively documented using photography, film and text, and then demolished." 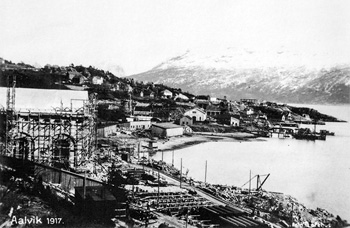 From the building of Bjølvo power plant in 1917.

1894: Contract signed for the purchase of waterfall rights in Ålvik.
1906: Minor construction work on the mountain begins (at the dam).
1913: Construction work proceeds at full speed before the war.
1915: The Storting issues A/S Bjølvefossen with a licence.
1916: Major construction work begins.
1918: Bjølvo power plant is commissioned along with the smelter with production of carbide, and later ferrosilicon and ferrochrome.
1919: Ruptures in penstock as a result of temperature stress.
1938: Penstock 2 and generating unit 4 in the power plant are commissioned.
1940: Sabotage and ruptures in the penstock.
1972: Generating unit 5 becomes operational.
2004: New Bjølvo power plant is commissioned and the old one closes its doors.
2006: Cable car system is shut down.
2006: NVE orders Statkraft to demolish Old Bjølvo.
2009: County conservator in Hordaland County issues a temporary preservation order.
2014: Directorate for Cultural Heritage lifts the temporary preservation order.
2014: Norwegian Museum of Hydropower and Industry completes the documentation of Old Bjølvo power plant.
2015: Demolition project starts.
2017: Demolition project continues. 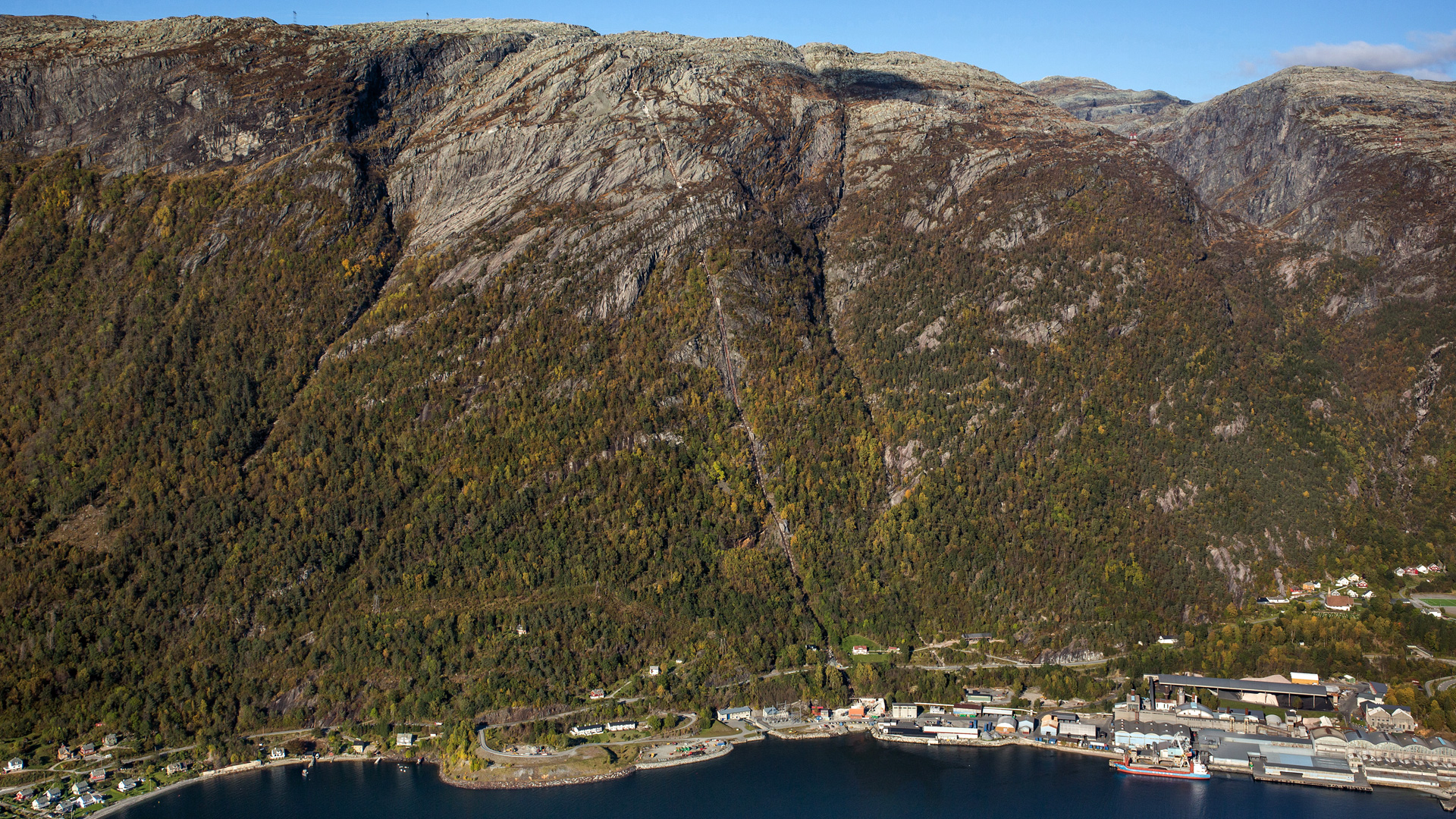 A steep mountainside with a long pipeline down to the Old Bjølvo power plant.

Rolf Yngvar Jenssen, who was originally assigned as Statkraft's Health, Safety and Environment (HSE) coordinator for the planned demolition in 2006, was now recalled to Ålvik. This time he would be project manager for a demolition project with a budget of NOK 67 million.

"The plant deteriorated quickly after the doors were closed in 2004," says Jenssen. "It was sad to see how the once fantastic facility became overgrown. Mildew crept up the walls and nature was on its way to reclaiming the area."

His task was to ensure a safe and proper demolition with minimal noise and inconvenience for the residents of Ålvik. It was also a goal to recover as much of the building waste as possible. Part of what has been a landmark in the village will serve a new function, the rest will be shipped away and turned into nails, reinforcement bar and recycled concrete.

"Kvam Municipality has been creative in terms of recycling and has accepted 400 metres of penstock, and track from the cable car system," says Jenssen.

"This will be used as flower pots, curbs and to mark walkways. The demolition project has provided the municipality with NOK 800,000 to put the components to use." 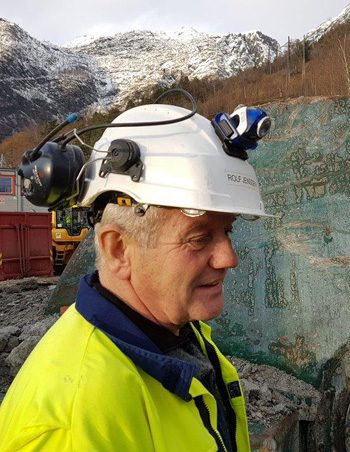 The demolition project by the numbers

> The project has required 10,000 metres of torch cutting.
> 5,000 tonnes of steel and metal must be removed.
> 4,000 tonnes of concrete must be crushed and reused or delivered for disposal.
> At the steepest point, work is being carried out on a 62-degree slope.
> 600 hours of helicopter transport have been completed.
> Twenty employees have worked a total of 35,000 hours on the project. 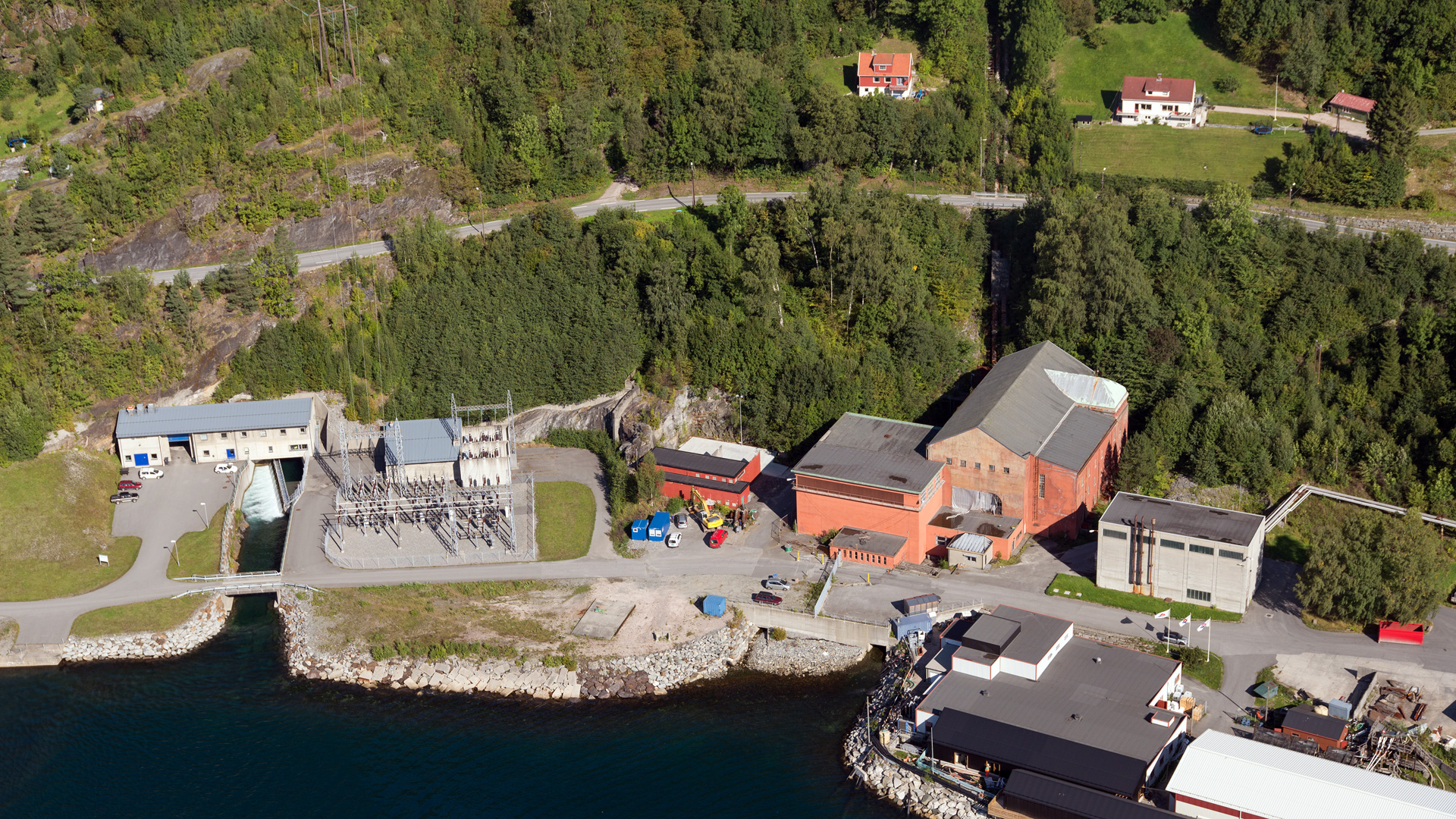 The red building is the Old Bjøvlo power station. The New Bjøvlo Power plant is located inside the mountain with its portal building here shown to the left in the picture.

At the entrance to the construction site there is a large banner with the following text: "We are demolishing Old Bjølvo. Our goal is 0 injuries. Our ambition is Statkraft's HSE award."

"This is high-risk work, so HSE has been a priority from the very beginning", says Jenssen.

"It has been crucial for us as property developer to find a building contractor that is an expert in access technology and industrial mechanics, and we chose AF Group. A turnkey solution was a conscious choice with regard to HSE. It's important that the experts are also those responsible for planning the implementation. At the same time it's a fixed-price contract – and this can also be a challenge for safety. The building contractor has to make money, and there will always be a risk of taking shortcuts. Therefore we as property developer have been on site at 6:55 every single day and, together with the contractor, have kept the focus on HSE by conducting safety inspections, both jointly and separately."

It has also been important for the project that Statkraft's CEO has put HSE high on the agenda.

"At the same time the contract was signed, Christian Rynning-Tønnesen introduced a special HSE award. This inspired us to set ambitious goals and develop several measures to strengthen HSE efforts."

The plant deteriorated quickly after the doors were closed in 2004. It was sad to see how the once fantastic facility became overgrown. Mildew crept up the walls and nature was on its way to reclaiming the area. 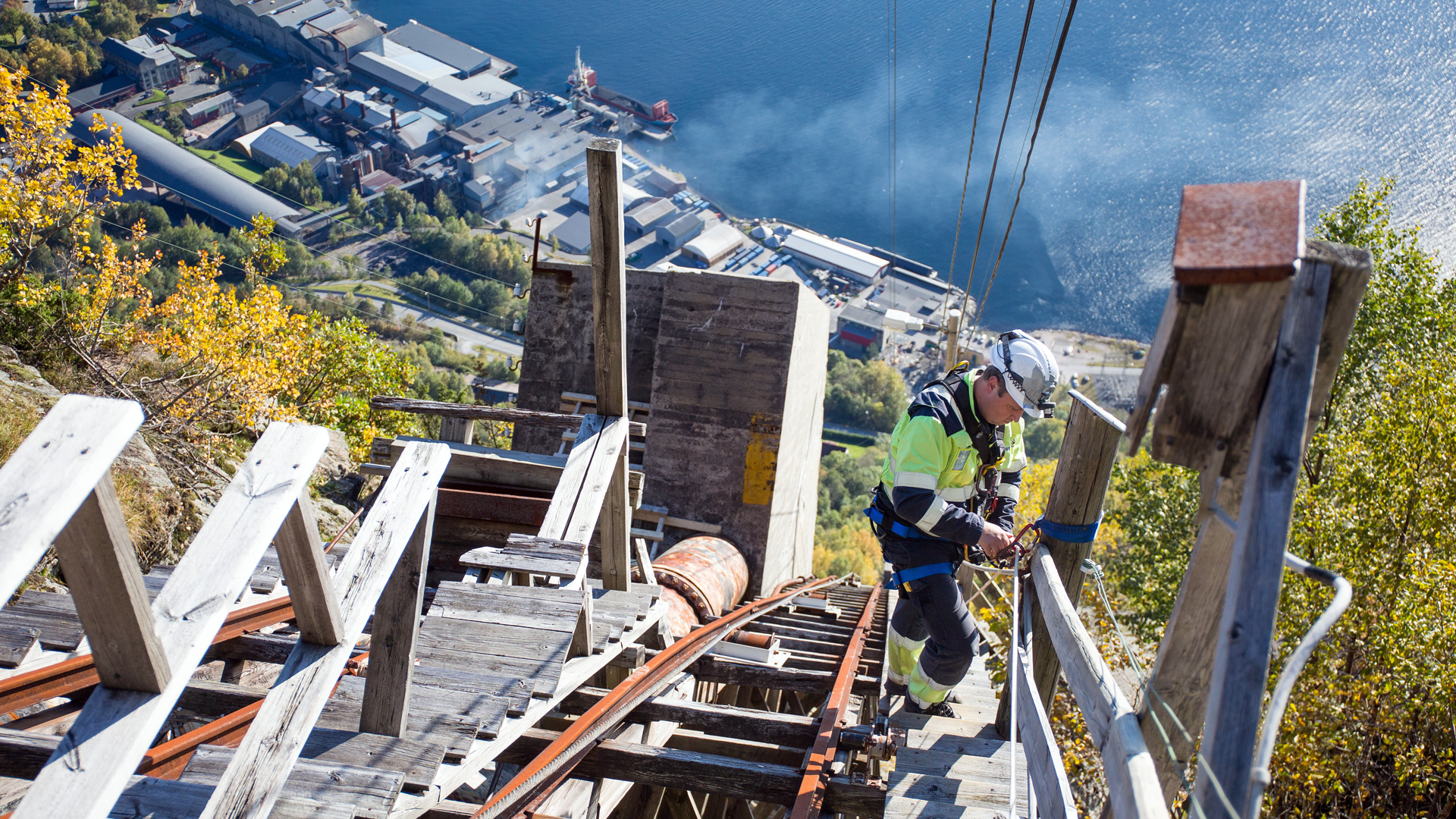 Security is of the utmost importance.

Jenssen believes it is important to broadcast their ambitions; it builds commitment.

"Everyone has an interest in working injury-free. Making it public in the local community put some pressure on us, and that's healthy."

So far the project has avoided serious injuries, but Jenssen is still not satisfied.

"We had two injuries requiring medical attention. Both were minor and we are very happy that they weren't serious. But they could have, and should have, been avoided. Both resulted from improper use of the correct protective equipment."

On this sunny day everything is proceeding as it should up on the steep mountainside. Several metres of penstock have been removed and sent down with the cable system that AF Group has set up to transport the material.

The helicopter hovers over the mountain and delivers the necessary equipment before the workers climb aboard at the end of their shift.

Text: Jenny Bull Tuhus
Photos: Eivind Senneset, Tommy Andresen, Statkraft, Norwegian
Museum of Hydropower and Industry (NVIM)
The article is based on a visit to the site in October 2016.

In 1909, the Storting (the Norwegian parliament) passed licensing laws to prevent Norwegian power resources from being bought up by foreigners. The principle of reversion to state ownership would ensure that privately-owned and developed waterfalls and power plants reverted to state ownership after 60 years.

A building or construction project where the building contractor in its contract with the property developer takes responsibility for both engineering design and implementation. 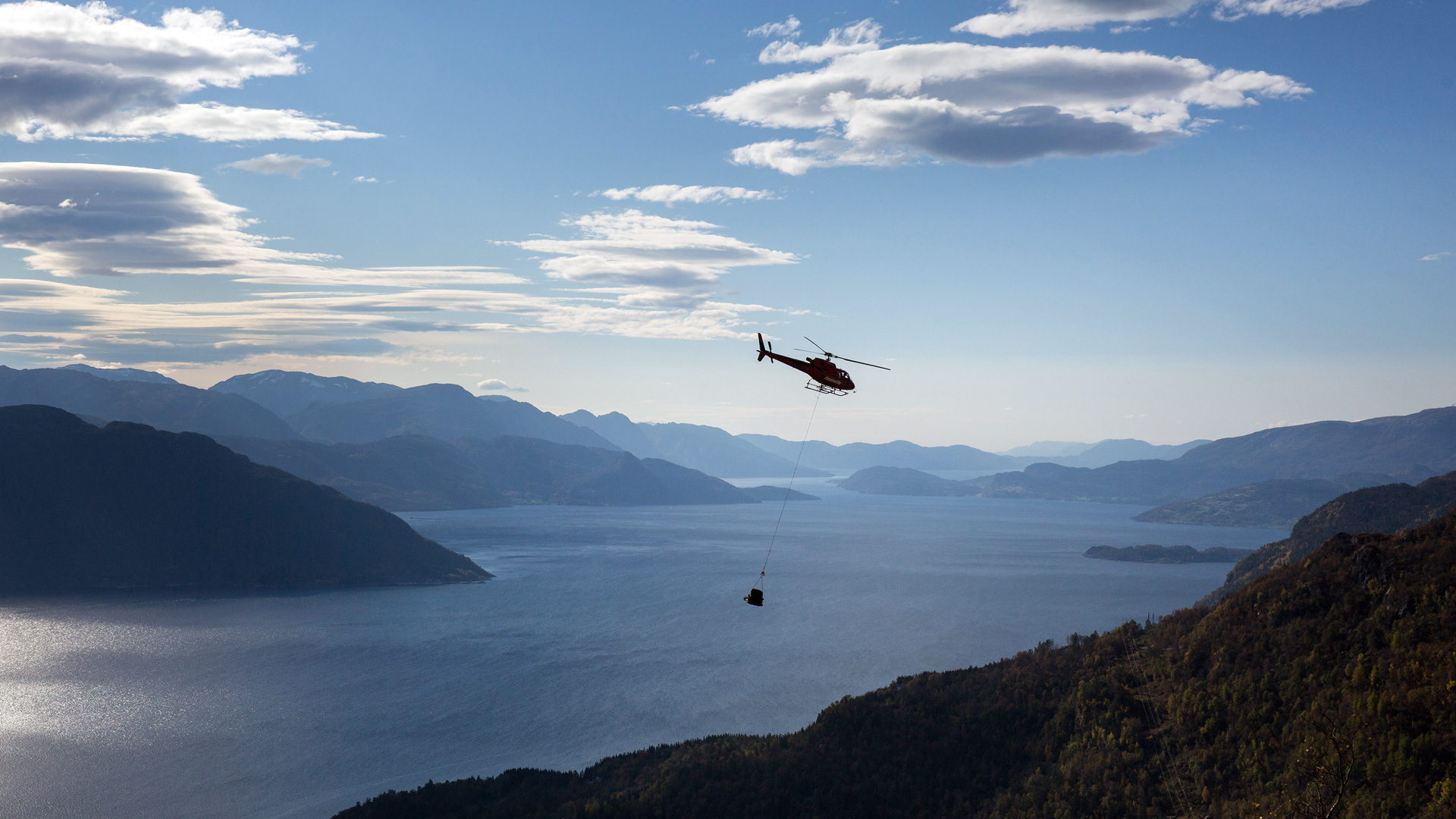 In a steep mountain area with noe roads, assistance from a helicopter is necessary ...