The new unit Project Delivery is responsible for the implementation of major construction projects in Statkraft. At the Roan wind farm in Fosen, Norway, the foundations are being poured.

Centralising project expertise will strengthen the implementation of construction projects in Statkraft. It is about delivering on quality, on time and on budget. Every single time.

In a windblown landscape in Fosen in central Norway, more than 100 construction workers are clearing forests, building roads and – literally – laying the foundation for Europe's largest land-based wind power project.

More than 22,000 kilometres away in the Devoll Valley of Albania work is in full swing to build the Moglice dam.

Up until 1 March 2017, these two major construction projects were organised in their own separate business areas in Statkraft. Now the newly created Project Delivery unit is responsible for both these projects being implemented properly.

> Will handle projects with budgets of NOK 300 million or more across all of Statkraft, from investment decision to completion.

> The unit is located in the Wind Power, District Heating and Projects business area in Statkraft. 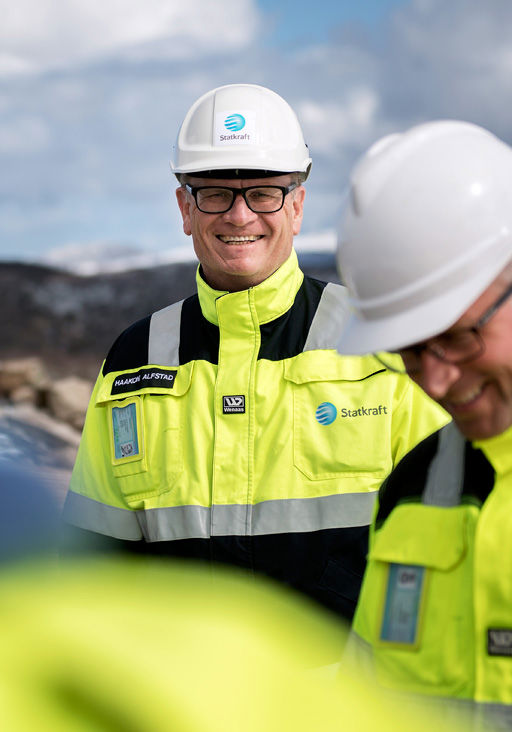 Haakon Alfstad heads the new unit for all major projects in Statkraft.

"We haven't always succeeded 100 per cent in carrying out major projects in Statkraft," says Haakon Alfstad who heads the new unit. "A little too often, budget, progress or delivery quality has suffered."

He explains: "There are many reasons for this. One of them is likely that the best resources haven't been gathered in one place to complete the relevant tasks. To be top of the class requires a certain volume of projects and a solid base of experience."

The experienced project engineer has worked on projects since he joined Statkraft in 1987 on the construction of Svartisen hydropower plant. He believes the time was right to create a separate unit for projects.

"Market conditions are very demanding," he says. "To be profitable we must deliver top quality at every step, regarding both project and technical deliverables. It goes without saying that we have more impact and become more efficient when we concentrate our expertise rather than try to maintain several parallel professional environments."

The differences between building wind power, hydropower and district heating are minor compared to the similarities of managing major projects. The unit will therefore handle all types of projects with budgets of NOK 300 million or more.

"I haven't experienced any objections to the reorganisation in the business areas or amongst the employees who will now acquire new colleagues and tasks," says Alfstad. "On the contrary, there is enthusiasm and eagerness to get started and get to know each other."

New work processes will first be noticeable on future projects. The reorganisation will have minimal impact on the two major ongoing projects, Fosen and Moglice.

"These projects have come a long way," says Alfstad. "You could compare it with a ski jumper who has left the jump and is in mid-air. It would be bad timing to introduce new procedures now. Our role will be to support the existing plans as best we can and help the projects complete properly. For a unit like this, it's always the ongoing projects that are most important. So Fosen and Moglice will be absolutely our first priority in the future."

Project implementation is incredibly exciting. It's satisfying to be involved in realising power plants that are very important to local communities or industry and help to increase the production of renewable energy. 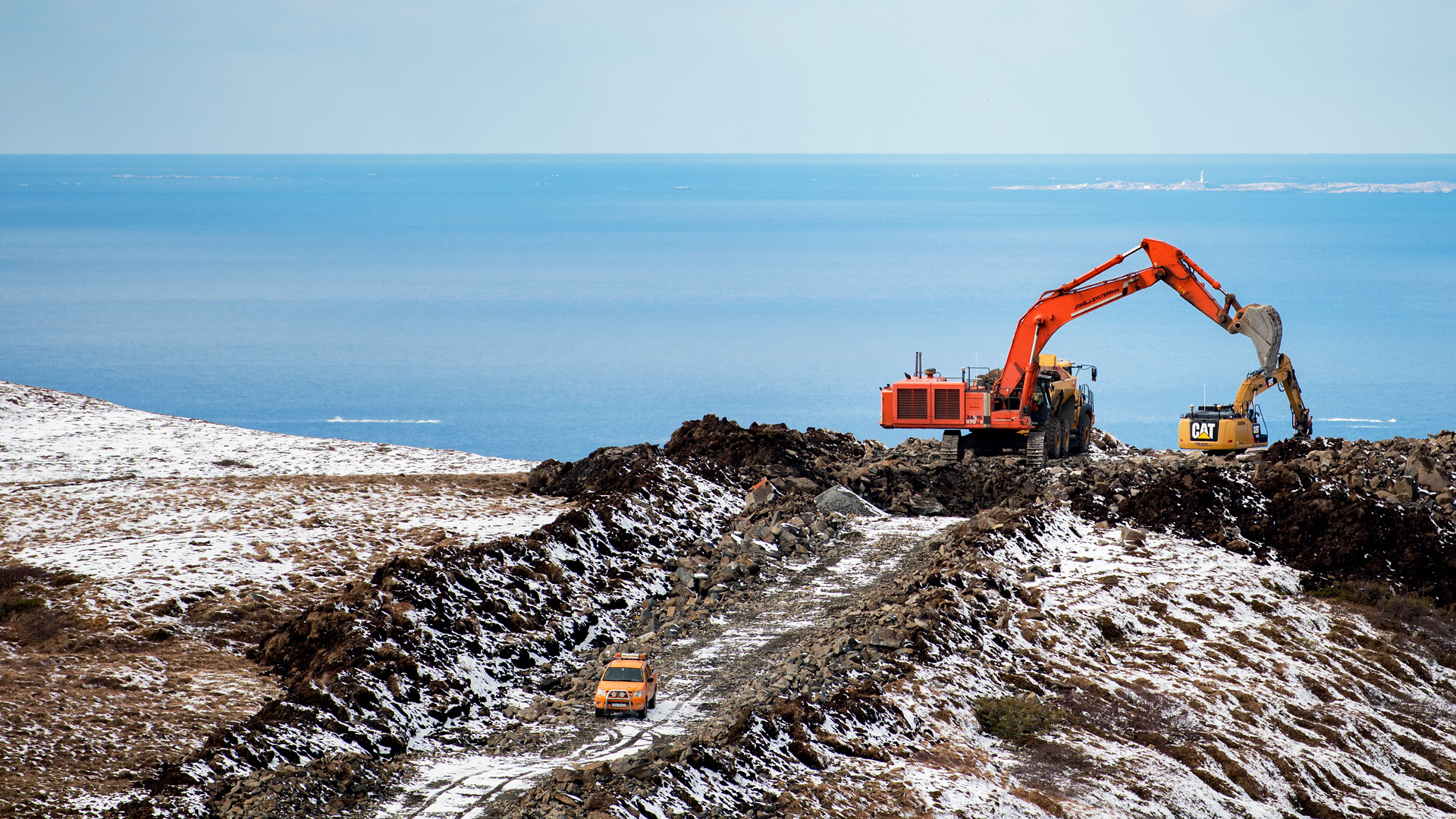 Construction work at the Fosen wind farm in Central Norway.

Alfstad chose Albania as the destination for the unit's first management meeting in May 2017.

"The Moglice project will report to a new management team and is in a challenging phase," he says. "Therefore, it was useful to go down and get to know both the country organisation in Tirana and the project organisation."

"Some of the work takes place in areas with rock types significantly different from those found in Scandinavia, so we’ve engaged external, international expertise," he says, adding that a huge 6.2-metre-wide tunnel boring machine (TBM) is cutting through the mountain, while Europe's tallest asphalt core dam is currently being built.

"We place a core of asphalt concrete no thicker than 1.2 metres at the bottom and narrower at the top," Alfstad explains. "Then rock fill is placed on each side of the core to keep the water in place. Each of these operations is demanding. The goal now is to maintain the progress."

Through more than 100 years of power development, Statkraft has solved challenges and often been a pioneer, from the first construction projects in the early 1900s – like Glomfjord and Nore, breakthroughs for Norway as an industrial nation – to the major projects in the 1960s, such as the Tokke power plants. Its vast size made Tokke a symbol of the engineering feats Norway could achieve. The 2000s saw the first international hydropower projects and the construction of wind power on land and at sea.

"Project implementation is incredibly exciting," says Alfstad. "It's satisfying to be involved in realising power plants that are very important to local communities or industry and help to increase the production of renewable energy."

Alfstad himself has a varied project background, has worked with hydropower and Norwegian wind farms, and was involved in negotiating the acquisition of the Sheringham Shoal offshore wind farm in the UK. He also worked on the development of the gas-fired power plants Knapsack 1 and Herdecke in Germany and was already responsible for the construction of Fosen when the new unit was created.

On lookout for ideas

Despite the fact that no new development projects have been approved recently, Alfstad is not afraid of becoming unemployed.

"With Moglice and Fosen, we have a demanding project portfolio until 2020," he says. "Fosen is in fact six wind farms which are being built in a coordinated programme over five years. At the same time Statkraft is on the lookout for new project ideas."

The new unit will primarily work on projects where a principal investment decision has been made.

"In the early stages, the project owners, meaning the business areas, are responsible for the project, even though we also assist in this phase," he adds. "The next major project is likely to be in hydropower in South America or biofuel in Tofte, Norway. Statkraft wants to build new profitable projects. A new growth period is coming." 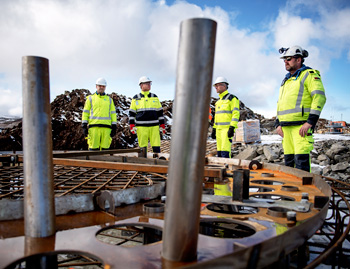 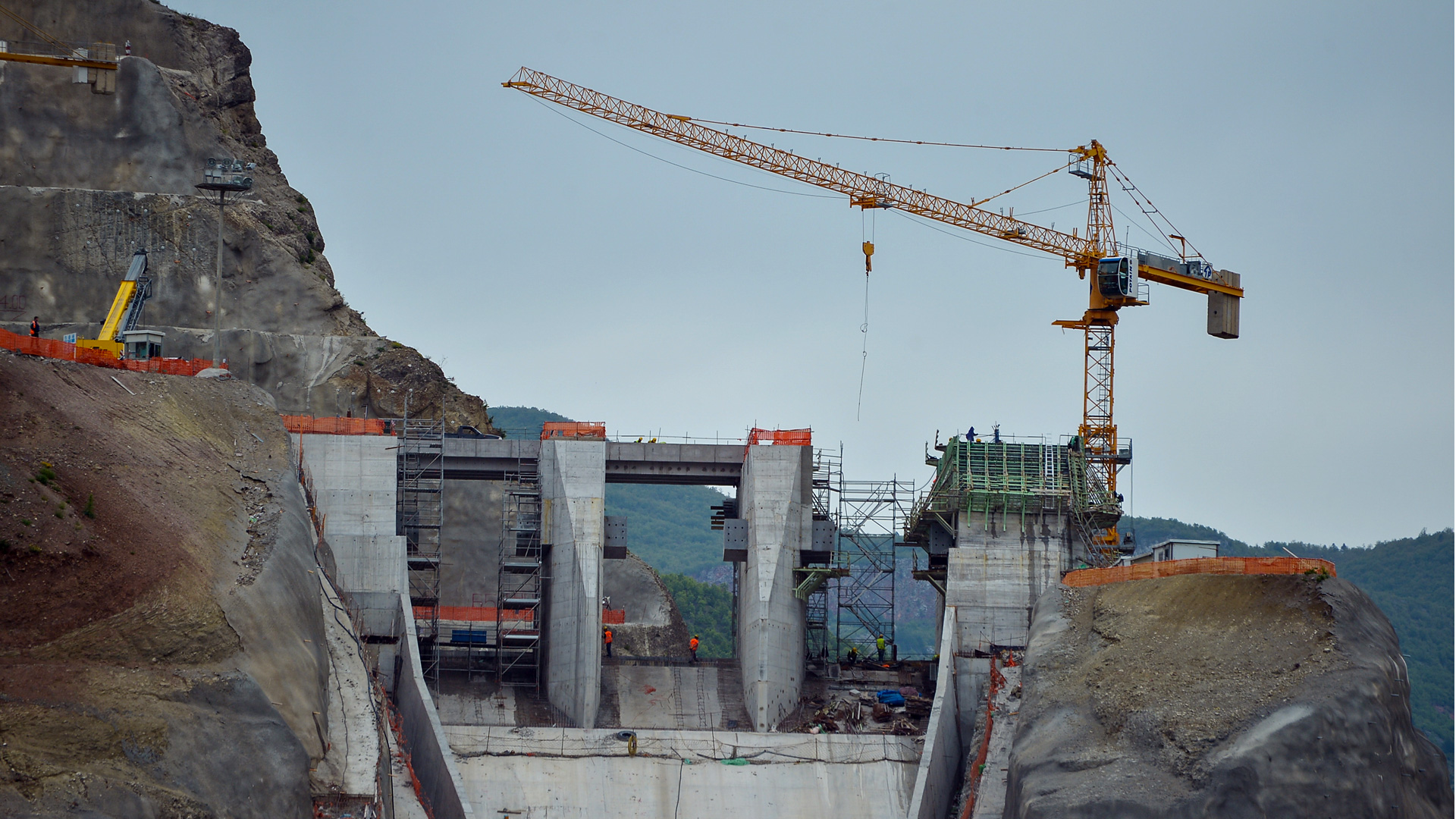 The Moglice project in Albania is in an important phase. The asphalt core dam is being constructed at the same time as a giant tunnel boring machine is cutting through the mountain.

Report from the field

"What you don't want in the operational phase of a project are surprises. You have to expect challenges and problems, but they shouldn't be of the unexpected variety," says the experienced project manager.

> ... about the Fosen wind farm project in Norway

> ... about the Devoll hydropower project in Albania 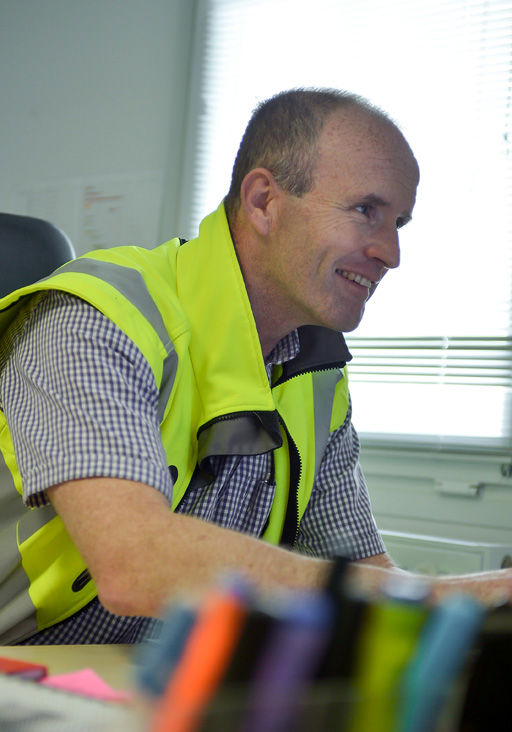 The project is currently in a critical phase of dam construction. The world's tallest asphalt core dam will be 167.2 metres high. According to the plan the first asphalt layer of the core will be laid in July 2017.

"The valley is very deep and the terrain is steep," says Burstrom. "On the left side the rock transitions to soil with the accompanying permeability and stability challenges. We have a team of skilled engineers on the case."

In addition to the dam, Albania's first underground power station is being built. The power plant will have two Francis turbines which together are expected to produce 440 GWh annually. There are also 11 kilometres of waterways being built, part of 17 kilometres of tunnels in the project. Six of these are being drilled with a Robbins tunnel boring machine (TBM). In March 2017 the project reached a milestone with the breakthrough of the downstream drive of the headrace tunnel.

At its peak the Moglice project has employed 1,500 people, and 85 per cent of the workforce consists of local employees from Albania.

"Both we and the Turkish building contractor carry out extensive HSE training and follow-up," says Burstrom. "Many of the people working here are not used to working within an HSE structure, and it demands a lot of the organisation."

In the spring he and the rest of the project members had a visit from the management team in Project Delivery in Statkraft.

"We haven't noticed head office organisational changes so much, except that I now report to Haakon Alfstad, who has also joined the Project Steering Committee (PSC). The PSC still retains all the original members, so continuity has been ensured," he says, adding: "For us who are out in the field on projects it's important that the management level above us has the understanding and expertise needed to communicate what are often complex issues within the larger Statkraft organisation, and that we don't have more points of contact than necessary. Efficiency is crucial in projects." 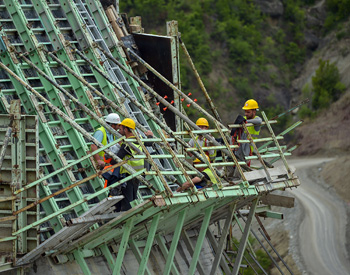 William Burstrom joined Statkraft in 2015. Before that the experienced project director worked on hydropower and other types of projects for other Scandinavian companies in countries such as India, Sweden and Colombia.

"One of the strengths of Statkraft is its commitment to openness and transparency," says Burstrom. "Problems that may arise are raised for discussion, and then it's easier to solve them. I like that direct approach. It makes it easier for both those who have my role and the management one level above."

From Burstrom's standpoint, free information flow is one of the most important aspects of a well-functioning project organisation.

"There are many people working in a project, often with different backgrounds. Communication is vital. It's important that those who need to know something get the information they need at the right time. Information must flow horizontally to be effective," says Burstrom.

Since the fall of 2015 Burstrom has lived and worked in the Devoll valley of Albania. Many would say that it is far off the beaten track.

"It depends who you ask," he says. "I have a colleague who lived 18 years in remote areas of India. For him this is almost cosmopolitan, while others think we're in no man's land. This is all part of project life. Personally I enjoy myself here in the heart of Europe with both Tirana and Macedonia within easy reach for day trips. When you work hard on a project, it's important to get away on your free time to recharge and relax. I also like to go bike riding in the local area after my workday ends."

It is a good thing the project director enjoys his work because the Moglice project has a year and a half to go. The reservoir will start filling with water in the autumn of 2018 and the power plant will be commissioned in the first quarter of 2019. 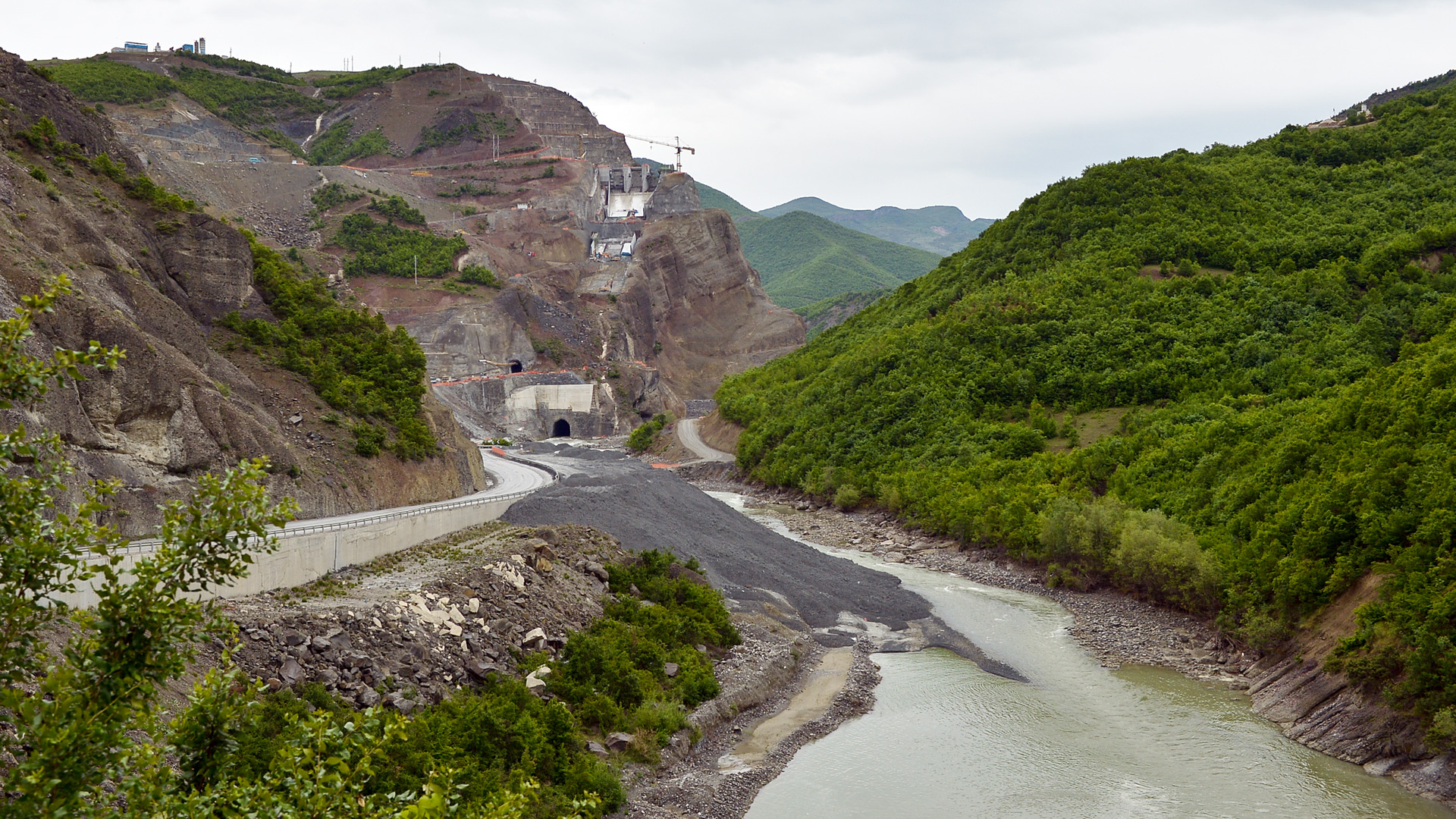 When Moglice is completed the Devoll power plants will increase Albania's power generation by 17 per cent.

At its peak the Moglice project has employed 1,500 people, and 85 per cent of the workforce consists of local employees from Albania.