Increasingly smaller margins in trading of renewable energy mean that traders must be more effective. The Coding Day workshop brings together participants from different Statkraft units to find out what robots can contribute.

In an old converted factory in Düsseldorf in Germany, developers, traders and analysts are gathered in small groups. The room is buzzing with the exchange of thoughts and ideas.

This is Coding Day.

The workshop is part of the e.trade project, and focuses on understanding the opportunities that algorithmic trading offers in the intraday market, where trading happens in real time.

Real time trading is becoming increasingly important to ensure a balance between supply and demand in the renewables market, where changes occur quickly. For example, as a result of the wind speed picking up and wind power production increasing.

This is about working in a different way. 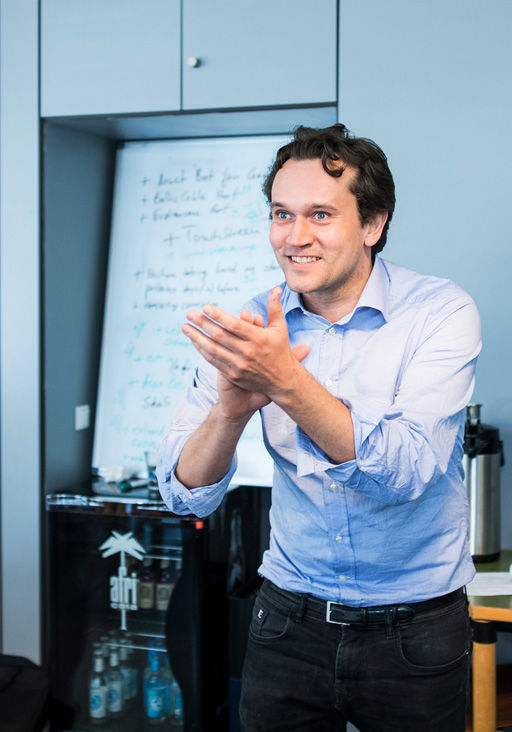 "The idea behind the project is to find out how we can support the traders' work through automation, by using robots to take over some of their tasks," says Dr. Konstantin Wiegandt, manager of Algorithmic Trading in Statkraft's business area Market Operations & IT.

"It's not about replacing people with machines, but looking at how their respective characteristics can be combined in the best possible way."

He often uses the chess world to explain:

"Up until 1997, all the chess grandmasters were humans. In 1996, Garry Kasparov lost his first game against the IBM supercomputer Deep Blue, but won the match. In 1997, Deep Blue won the entire match. Kasparov got the idea to create a new game he called advanced chess, where a team consists of people and a chess computer. It turned out that humans and computers combined are better than one supercomputer alone."

The idea behind the e.trade project is to hop over the supercomputer part and go directly to the advanced trading level.

"Computers are fast," says Wiegandt. "They can do many things at once and are systematic, precise and reliable. People are creative and smart – they can propose and carry out new trading strategies, and they know the market so they can determine which algorithm to use in a given situation. By letting machines take care of tedious calculation tasks and having people retain full control of the strategy, it is possible to streamline intraday trading."

Another advantage of automation is that the computer documents everything it does. Thus, the processes are more transparent, and it is easier to provide documentation to the authorities who monitor that everything is done properly.

> Two-day workshop in Düsseldorf on the opportunities that algorithmic trading offers in the intraday market.

> Participants come from various Statkraft units, both in Düsseldorf and Oslo. 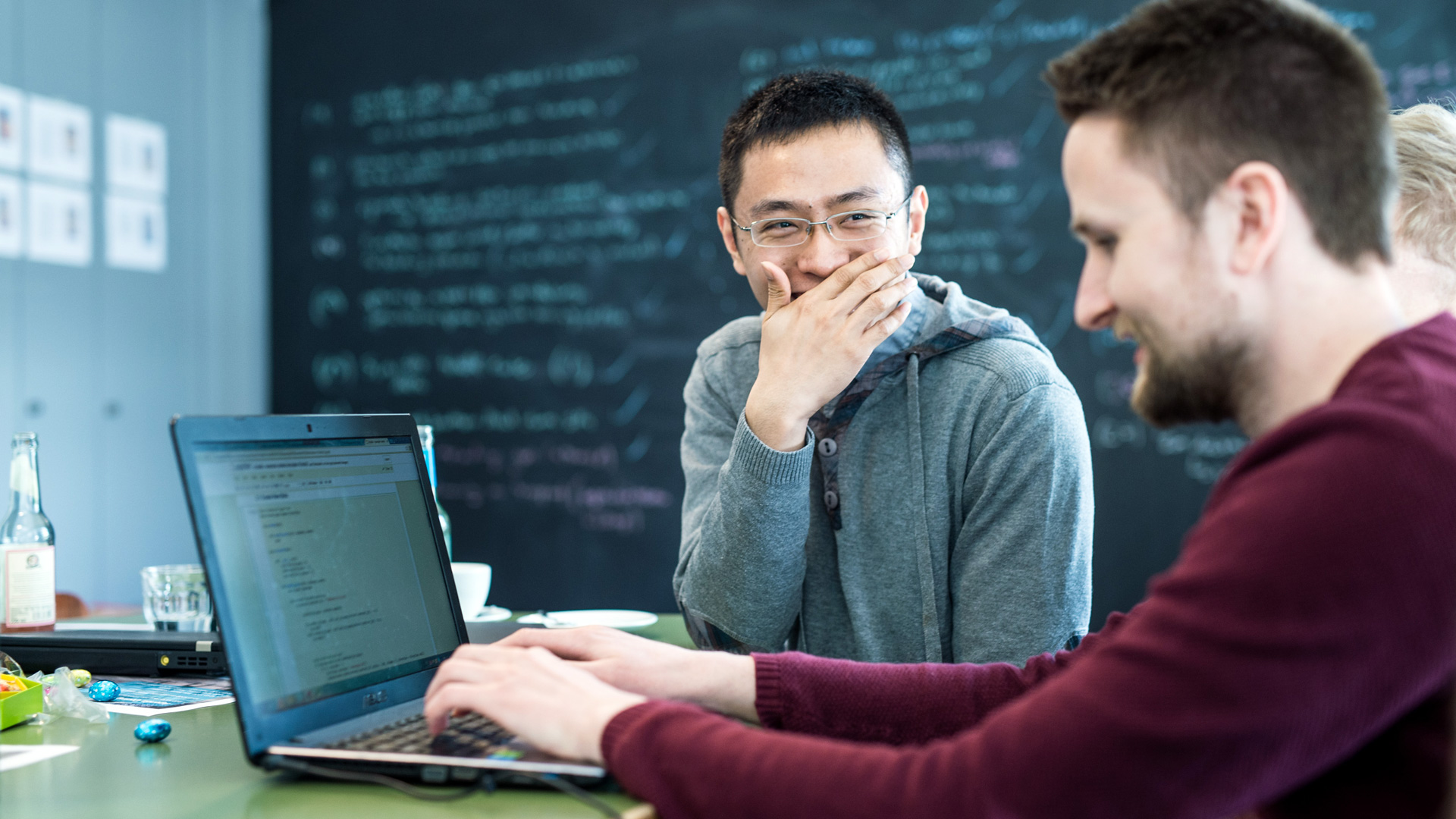 Jihan Li (at the left) and Endre Skeie exchange ideas at the Coding Day workshop.

During Coding Day, colleagues from various disciplines gather to brainstorm, both those who create automated systems and those who use them on a daily basis.

One of the items on the agenda is the Intraday Algo Trading Game, a game that shows how the different components of a power exchange function. Participants play the roles of the components, and information exchange takes place by each group sending a note to the next component with their decisions.

"We don't want to just develop a self-driving car and then put the traders behind the wheel," says Wiegandt. "We want them to be involved in deciding how the car should be, so they can better understand how it works."

"Studies show that people do not use their entire intellectual potential when sitting in front of a screen with a keyboard and mouse. Maybe it's an idea to have colour codes on the screen? Perhaps traders use virtual reality goggles and cyber gloves so that they use their whole body and not just the hand that controls the mouse?"

Wiegandt emphasises that automation and digitalisation are nothing we should fear. "Robots will not come and take our jobs," he says.

"This is about working in a different way. By using machines for the tasks they do best, we can concentrate even more on what we humans do best." 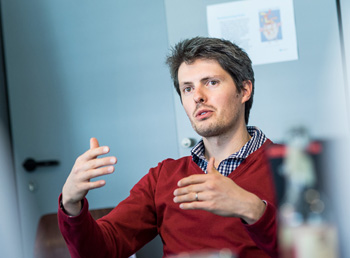 Michael Demars, one of many engaged participants at Coding Day in Düsseldorf. 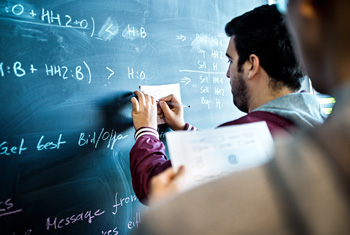 Gökhan Balci in deep concentration in front of a blackboard full of code. 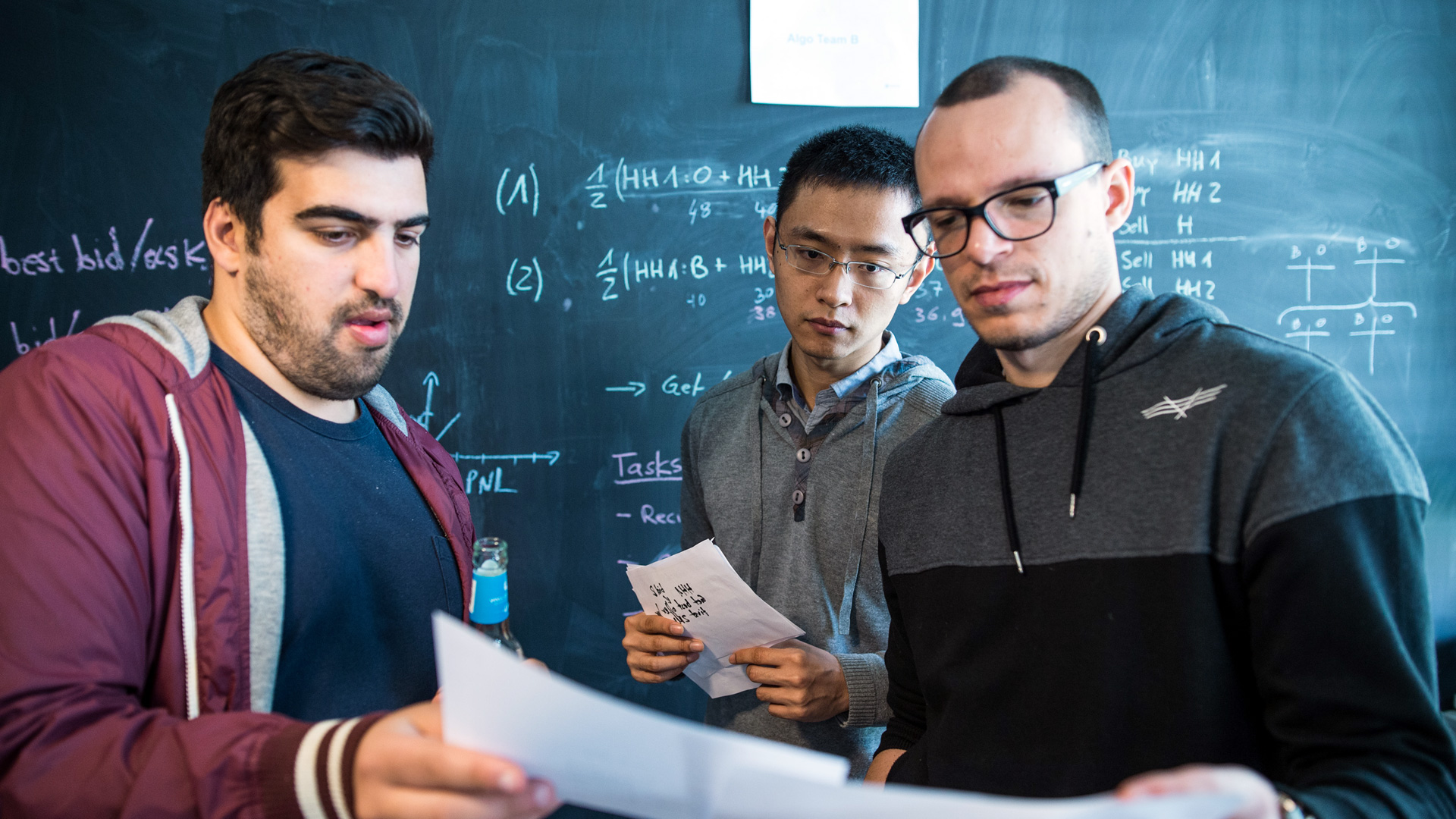 "It's not about replacing people with machines, but looking at how their respective characteristics can be combined in the best possible way."

From left, Gökhan Balci, Jihan Li and Julien Sterz agree on the benefits of meeting in an interdisciplinary forum.